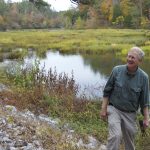 Henry serves as executive director of Friends of Shades Creek, established in 1998 with the assistance of the Alabama Rivers Alliance, for which he served as president of the board. He worked in forestry in Alabama for twenty-five years and served on the Woodlands Committee at the Birmingham Botanical Gardens, where he became Director of Education in 2008 and retired in 2018. With members of the Garden Club of America, he began Centennial Trees, a program unique in the country, planting thousands of forest seedlings, grown from the seed of trees known to be descended from Birmingham’s native forest. He studied forestry at the University of the South, Sewanee, and plant and soil science at the University of Kentucky and Texas A&M University. He is particularly interested in the role that forests play in protecting watersheds and the in principles of urban and riparian forest restoration. He has served on the Cahaba River Society’s Stewardship Committee since 2015.