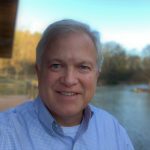 Clinton Smith is the Vice President of the Stewart Perry Company, a general construction firm based in Birmingham that builds mostly in the eastern half of the country.  Stewart Perry has been involved in successfully building projects along the Cahaba River and in the watershed and was awarded the Watershed Conservation Development Award in 2007 for the Shops at River Run, in 2009 for the Stewart Perry Campus and in 2010 for the Ruffner Mountain Nature Center. All were built using best practices with the river in mind and Clinton was fortunate to be involved with all three.  Clinton is a LEED Accredited Professional and has served as Chairman of the Associated Builders and Contractors for the State of Alabama.  He is a member of the Birmingham Sunrise Rotary where he is a Past President and helped promote their club to be involved in several Cahaba River Cleanups.  He is active in the community and has served on a number of local boards.  He is an avid outdoorsman where he enjoys hunting, spending time at the lake and on the water.