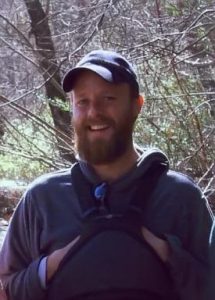 Shane Harper Hulsey served as Education Director for Cahaba River Society, leading the CLEAN Environmental Education Program and guiding over 10,000 children and adults into the Cahaba for hands-on lessons about the environment. Children and teachers frequently called to say that Shane’s canoe trips had been their best field trip ever, and even biologists and  scientists would report that they’d learned on their excursions with him.

As a highly-regarded environmental educator, he was the recipient of the Alabama Rivers Alliance 2005 River Hero Award, a lifetime achievement award reserved only for exceptional individuals who “exemplify river stewardship and have a rich history of advocating for the protection of Alabama’s waterways.”

An avid outdoorsman, Shane was also an accomplished canoeing and kayaking instructor who loved spending every free moment outdoors on rivers.

Tragically, Shane lost his life on October 20, 2006 in a kayaking accident during a trip with friends to Little River Canyon. His loss was felt deeply by his loving family, devoted friends, and Alabama’s environmental community as a whole.

RECOGNIZING the Cahaba River Society, the Hulsey family, and our entire community has suffered a great loss with the death of our beloved colleague and Education Director, Shane Hulsey, on October 20, 2006; and

WHEREAS, CLEAN (Children Linking the Environment Across the Nation) was founded on the belief that people act to protect the places they care deeply about and people only care about the places they know and understand; and

WHEREAS, One of the driving forces of Shane’s life was to get people out into nature so that they would love and care for the Earth; and

WHEREAS, It is estimated that Shane, during his tenure with Cahaba River Society, took more than 10,000 eager children and adults into the waters of the beautiful Cahaba River for hands0on lessons about the environment; and

WHEREAS, Shane, as Education Director, greatly expanded the CLEAN Program’s reach, educational effectiveness, and popularity; therefore, be it