“Don’t litter–it ends up in your River!

Reuse, reduce waste, and recycle instead.” 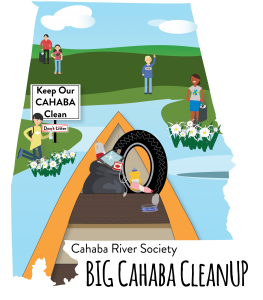 To kick off the campaign, Cahaba River Society planned the most ambitious Cahaba River Cleanup ever undertaken. Sponsored by Alabama Outdoors, this kickoff event would have involved over 200 volunteers working in teams, both in canoes and on foot, to clean up to 50 miles of the Cahaba River from Trussville to Helena. Originally planned for June 8, 2019, the a forecast of severe weather forced the cancellation of the initial kickoff event due to concerns about volunteer safety.

Tell your friends not to litter!

How does litter end up in your river? Episode 1: Plastic Bags

How does litter end up in your river? Episode 2: Cigarette Butts

Big Cahaba Cleanup in the News

CBS 42: 5/31/19, “The Cahaba River Society will launch the largest Cahaba Cleanup ever,” interviews with Gordon and Beth about the problem of litter pollution and the Big Cahaba Cleanup. Cameron

Thank you to our Big Cahaba Cleanup Partners!